At the beginning of the session we passed out envelopes to each of the seven players. They were told to open them and look at the 2 playing cards within. If neither were spades or clubs, then they weren’t the killer of the wizard’s fiancé. While they were told there wasn’t a rule against telling the others if they were the murderer, we didn’t recommend it. Nobody did!

The following prisoners were in “residence” at Dartmoor prison: 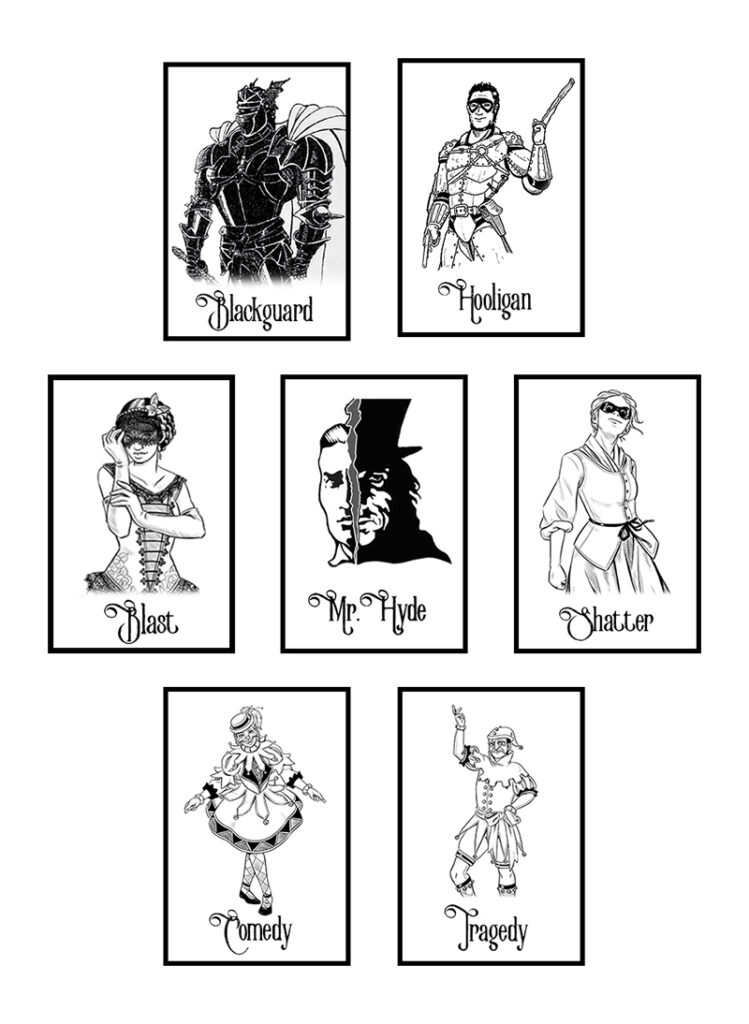 While enjoying their respite from lives of crime, they were stunned to hear a booming voice shout from nowhere. The voice said they would pay for the murder of his fiancé, and only the death of the guilty party would sate his lust for vengeance! With that, the sky rumbled and the entire SuperMankind wing of the prison seemed to drop six feet and crumble to the ground!

The electrical power to their unique bonds were out, and the gas jets lighting the hall were snuffed out. They staggered from their cells to find themselves alone on a forbidding rocky landscape, with a reddish-gold lit sky. There was no sun in evidence, nor clouds. Just a lit scene as if from a burning ember.

After discussing their issues, Mister Hyde decided he wasn’t up for talking and started walking away. Blackguard began belittling the vilenesses of the party, which quickly led to conflict. Hyde apparently felt the noise was too much, so he lifted a rock the size of a carriage and threw it behind him at the bickering villains.

No one was seriously hurt, but tempers were flaring. Further conflict was stopped by the bell-like laughter from a nearby crag. Upon the crag was a beautiful woman, normal save for batwings and horns, fangs and reddish skin. These subtle clues escaped the villains at first, but Blackguard’s Occult knowledge revealed her to be a Succubus of the Pit.

The fetching creature seemed to enjoy their murderous rage, and encouraged them to continue fighting. As contrary as ever, the villains refused to fight. Instead they wanted to know where they were and what was going on.

She explained with glee. Apparently they’d been cursed by a wizard to Hell. They would stay here forever, unless they found the villain who was responsible for the death of the wizard’s fiancé and killed them. Another option was to travel to the edges of Hell and get a ride across the river Styx from Charon the ferryman. She reiterated that anyone who died in Hell would be trapped here for eternity.

Curiously, the group asked her opinion of where to find information on the guilty party. She mentioned in passing the Witch of the Swamplands to the south. However, she REALLY wanted them to go to Kazzherak’s palace in the mountains. It was EVER so much more fun, and she assured them the Lord of the Caverns had many entertainments especially made for mortals like them.

Strangely, the villains weren’t keen on that advice and discussed going to the witch. Hyde, as usual losing his patience, charged the succubus and made a grab for her. He went right through the image, revealing it to be an illusion. Another peal of laughter came from nowhere, but no one felt an urge to try and find her true location.

Instead, they traveled south. They saw strange and disturbing sights, with massive worms burrowing in the sand and devilish vultures flying in the sky.

Suddenly, a maw emerged from the sand beneath their feet, swallowing both Hyde and Hooligan! It was one of the massive devil worms, and it quickly retreated below the surface with its prey. Hyde was having none of it, and despite the pain of the stomach acid smashed his way out of the worm’s gullet and dug for the ground above him. Hooligan, appreciating having Hyde take any damage before him, followed in the tunnel. Hyde emerged on the surface, not half annoyed. Hooligan was in tow, and both ignored the snide comments Shatter made at how they must’ve come out the worm’s other end. The cohort of nefarious SuperMankind managed to avoid any further encounters until they reached the swamp.

In the middle of the marsh, they saw a thatch-roofed hut in the middle of an island, with a fens encircling it. The posts had large white knobs on their tops, but they couldn’t make out details. So, Blast flew over directly to the hut. Shatter gathered a stone causeway to lift her over the marsh to the island, and the rest of the group used it to pick their way through the sodden ground.

Once there, they saw (big surprise) that the white knobs on the post were skulls. Most seemed human, though a few were questionable. Unusually polite, they knocked on the door and were invited in.

Inside the hut was a bubbling cauldron over a fire. Floating over the cauldron was a crystal ball, with the head of a hag within. This was the witch, who greeted them and told the villains if they wanted answers to their questions they would have to make sacrifices. While discussing what to do, Blackguard offered his enchanted armor and mace as a sacrifice if the witch would return him to the surface world. She did so, and the armor disappeared. The witch then informed the others that due to the nature of the curse she couldn’t send back anyone who was guilty of the murder; thus Blackguard wasn’t the murderer.

End Part One! Who is the murderer of the innocent beauty fated to wed the Wizard Mallus? Who will betray their companions for their own selfish ends? How will Hyde end up in the Elemental Plane of Lime Jello? All will be revealed in the next chapter of “HELLSCAPE”!