Like many others, I enjoyed the 2017 Wonder Woman movie with its excellent portrayal of a naive Amazon and her using her powers to benefit mankind. I especially enjoyed the setting of the First World War, as that is only a handful of years beyond the Victorious RPG setting. Thus I humbly provide the following statistics for a Victorious Wonder Woman!

Bringing a Wonder Woman to your Chronicle:

Only a few small changes to the movie storyline could bring this powerhouse of an Amazon to your Victorious RPG chronicle. Since Steve Trevor is critical to bringing Wonder Woman to “Man’s World”, it is no stretch to believe an American would be working for/with the British. The last quarter of the nineteenth century saw a rise in the idea of “Anglo-Saxon Solidarity”, with the USA and Great Britain assumed to be blood allies against the Latins (France/Italy/Spain), Teutons (Germany/Austria), and the Slavs (Russia/Balkans). Having him on the run from ‘enemy’ soldiers and ships could fit the narrative and still be quite plausible. Other ideas follow below: 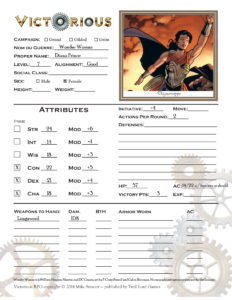 Wonder Woman is copyright William Moulton and DC Comics. No copyright infringement is intended by this homage.