It’s International Talk Like a Pirate Day! We hope you’re all happily cutting jibs and hoisting sails and saying “Arrr!” to random passersby on the streets. In the spirit of the day, we’re offering you a themed NPC you can use in your Victorious campaign if you’re just trying us out with the Quick Start rules on our Resources page. Read on:

Captain Roger Blackfriar wasn’t the worst pirate in the Spanish Main, but he wasn’t the best either. He’d spent half a lifetime in the shadow of better privateers and pirates, always trying for the big catch—the golden prize that would set him up for life and make his name revered with other legends such as Blackbeard and Kidd, Raleigh and Drake. While he caught enough Spanish merchantmen to keep his ship afloat and his crew paid, he could never catch the better prizes. His luck always seemed to fail him when it counted.

One night he got drunk and staggered to the hut of an old Houngan, who was notorious among the pirate community for having the touch of Satan about her. First he’d paid a few shillings for a telling of his fortune, and her words only seemed to promise more mediocrity, more failures.

In a drunken frenzy he demanded she get hold of “Ol’ Nick’ hisself!” and he’d sell his soul to have a Spanish treasure ship in his grasp. The old woman smiled, and said the bargain was struck.

Within two weeks, Blackfriar’s ship entered a thick fogbank, quite unusual for the Caribbean. As he tried to regain his directions, his vessel nearly rammed a massive Spanish galleon. This ship, the yearly treasure craft brining the gold and silver of the New World to His Spanish Majesty, had lost her escorts in the fog. She was alone, and bewildered as to her direction.

Not missing a moment, Blackfriar gave a couple of broadsides into the Spanish ship before they could react. With a crash of timbers, his ship moved alongside the liner and his men charged over the gunnels to board their prey. Despite heavy fighting, it was the pirates who were victorious. At last, Captain Blackfriar had his gold, and his reputation would soar!

So it would, but not in the way Blackfriar believed. With an unearthly chill surrounding them, the great Spanish galleon Esmerelda sank into the murky depths of the ocean, with not a single survivor found in the waters. The few on board Blackfriar’s ship Cutlass looked for any of the boarders, but eventually sailed away to spread the tale of Blackfriar’s failed grasp of fortune and fame.

This wasn’t the last of the Blackfriar, however. Years later, sailors started to speak in whispers of an unnatural fog bank that swept down on lone ships at night, and the bones of Captain Blackfriar and his dead crew would slash and kill, the apparition still searching for his fame and fortune aboard the seaweed-choked wreck of the Esmerelda. Is the undead captain searching for more gold? For fame? For an end to his torment? No one knows, but legend says he searches the Caribbean and the Atlantic, firing cannon broadsides into steamers and ironclad warships alike, leaving none to speak of his passing. 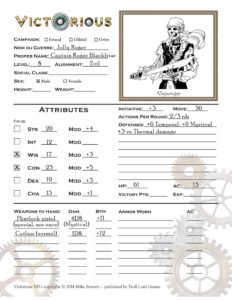