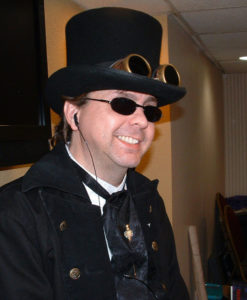 Mike has participated in various aspects of the role playing game industry for the past decade. Besides authoring the Victorious RPG, he was the founder of the dragonsfoot.org’s gaming e-zine Footprints as well as writing a fantasy campaign setting (DF11 Guide to the Realms of Aedenne) offered on the site.

Mike was an initial contributor to Troll Lord Games’ Castles & Crusades fantasy RPG in all three of the core hardbacks (Players Handbook, Monsters & Treasures, and Castle Keepers Guide), authoring two adventure modules (U1 Shadows of the Halfling Hall and U2 Verdant Rage) as well as the first edition of the Castellan’s Guide to Arms & Armor.

He also worked with Gary Gygax from 2006 to 2008 on various C&C and Lejendary Adventure products such as Castle Zagyg Volume One: Yggsburgh and Essential Places.

Most recently he is writing a series of system-neutral adventure aids for Frog God Games called Waypoints, which highlight a single business, public building, or other more fantastical point of interest and give possible adventure hooks and ideas related to them.

As DM Mike, he can be found as one of the hosts on the Save for Half Podcast, a show about old-school RPGs and the modern games inspired by them, now entering its fifth year of production. He is also a host for the Crusader Podcast which covers Troll Lord Games products. Prior to that he was one of the founding hosts of the Save or Die Podcast, a show focused on OD&D and the Basic/Expert boxed sets from TSR.

When he is not developing games or recording podcasts Mike is writing short stories set in the Victorious RPG world. To Catch a Unicorn was one such story, published by Dark Oak Press in their second Capes and Clockwork anthology and was a Top 10 finalist in the 2016 Preditors and Editors Readers Poll for Best Steampunk Short Story. He is also querying literary agents regarding a full-length YA novel featuring zombies in the deep south.

Mike is a professor of history with degrees in both European and American History, emphasizing the Victorian era and both World Wars.